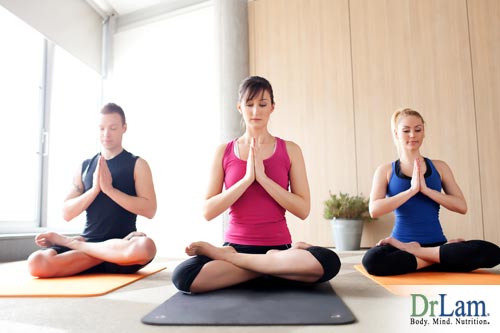 Three main sets of muscles are active when you breathe normally: the intercostal muscles, the abdominal muscles, and the respiratory diaphragm. All muscular activity of the body, whether it be contraction of individual cells, isotonic or isometric exercise, agonist or antagonist activity, concentric shortening, or eccentric lengthening, take place strictly under the guidance of the nervous system. breathing is special in that it involves both the Somatic Nervous System and the Autonomic Nervous System (ANS). In other words, you can voluntarily control breathing, or if you choose not to do so, the body will take over automatically. Utilizing controlled breath technique is a necessary part of yoga for adrenal fatigue. Both systems are therefore connected. The ANS is self-regulating and is not usually controlled by the Somatic Nervous System. For example, you cannot voluntarily decide to make the heart rate beat faster or slower. This is normally regulated by ANS and is beyond the Somatic Nervous System control. However, you can influence the heart rate by regulating, on a conscious level, the respiratory rate because breathing connects both nervous systems. Long exhalation will slow down heart rate during the exhalation process. By modulating our respiratory rate at will, we can influence the ANS breathing, therefore, offers an important gateway into the world of the ANS, allowing us to modulate it. This is of vital importance to those with advanced Adrenal Fatigue when the Autonomic Nervous System is invariably dysfunctional.

The ANS is broadly divided into the Sympathetic Nervous System (SNS), which is responsible for adrenaline release and the fight or flight response on one side, and the Parasympathetic Nervous System (PNS), which is responsible for rest and relaxation of the body’s internal function. In quiet times when there is less need for air, the PNS mildly constricts the smooth muscle that surrounds the airways, especially the smaller bronchioles, and thereby impedes the flow of air to and from the alveoli. But in times of emergency or increased physical activity, the SNS opens the airways and allows air to flow more easily. The PNS, by way of release of its neurotransmitter, acetylcholine, works in a dynamic balance with the SNS, by releasing its neurotransmitter, norepinephrine, to modulate and maintain homeostasis in our body. This delicate balance must be maintained for us to feel good. Yoga for adrenal fatigue helps to maintain this balance.

Adrenal Fatigue, especially in the advanced state, is invariably tied to overstimulation of the SNS. Extensive experiments have shown that Type A high-strung personalities have about threefold more plasma norepinephrine responses and fourfold larger adrenaline responses during exposure to a various laboratory and clinical stressors than compared to Type B individuals who are laid back and relaxed. These chemical transmitters of the SNS flood the body in Type A individuals, resulting in a body that is on constant alert, leading to a vicious downward spiral of compensatory responses and ultimately adrenal burnout. One key to adrenal recovery is to reduce SNS tone and enhance PNS tone. Adrenal breathing can help greatly. Adrenal breathing influences the autonomic circuits that slow the heartbeat and reduce blood pressure, producing calm feelings and a sense of stability. It calms the mind and allows the body’s internal homeostatic system to reset itself. This conduit by way of controlled respiration consciously gives us access to an autonomic function that no other system of the body can boast.

Those with severe adrenal weakness often exhibit abnormal breathing patterns. Abnormal breathing patterns in an Adrenal Fatigue setting can over-stimulate the SNS, trigger panic attacks, and contribute to adrenal crashes. We tend to breathe shallowly or even hold our breath when we feel anxious or are under stress. Sometimes we are not even aware of it. Shallow breathing limits oxygen intake and adds further stress to the body, creating a vicious cycle. Holding one’s breathe either at the end of inhalation or exhalation stimulates the sympathetic nervous system, aggravating adrenal weakness if the body is already in a state of a low adrenal reserve. Adrenal breathing Exercises can break this negative cycle by rebalancing the ANS and gently delivering more oxygen to the body for natural energy generation without over-stimulating the SNS. The body gets to take a break and reset itself to its natural state.

Proper adrenal breathing releases tension from the body, clears the mind, reconnects the body to the mind, reduces fatigue, and improves both physical and mental wellness. This is accomplished by enhancing the Parasympathetic Nervous System’s function. It shifts the body’s basal resting mode from a sympathetic to a parasympathetic bias.

Bear in mind that in Eastern cultures, breathing is also used as an effective modality to enhance energy and alertness by stimulating the body’s Sympathetic Nervous System (SNS). This is seen frequently in certain types of yoga breathing and is usually accomplished by various techniques involving breathe holding that gradually increases intensity and performing quick breathing exercises with high frequency (belly breathing). Another technique involves using the chest wall only to affect breathing and this is called thoracic or paradoxical breathing. The chest wall expands while the abdominal wall is drawn inward towards the back during inhalation and outward during exhalation. While these breathing techniques are empowering and increase energy flow, they can also drain the body of the already low energy state of Adrenal Fatigue. They, therefore, should be avoided in Adrenal Fatigue.

In adrenal breathing, the goal is to reduce sympathetic tone. All sympathetically driven and oriented breathing techniques should, therefore, be restricted and not be deployed until the adrenals are well healed or unless directed by your healthcare professional. breathing programs that do not consider this may make Adrenal Fatigue worse.

Proper adrenal breathing patterns should be smooth, quiet, regular, and rhythmic. The intensity of each breathe must match the body’s current state of a reserve. There should be no intentional breath holding or prolonging of breathing time during inhalation or exhalation. This is best accomplished by gentle breathing using the diaphragm. This is often referred to as abdominal breathing, or belly breathing because this is where movement can be seen and felt. Improper technique can worsen Adrenal Fatigue.

Beginning students and those with advanced Adrenal Fatigue (Stage 3 or higher) and weak constitutions should be very careful in the inhalation and exhalation intensity. Forcing more air in and out of the lungs beyond what the body can tolerate may drain the body of reserve and potentially have a negative effect of activating the SNS. This can trigger an adrenal crash. The intensity level may need to be titrated downwards significantly in times of adrenal crashes.